Weather, Bugs and You

Weather Bugs and You 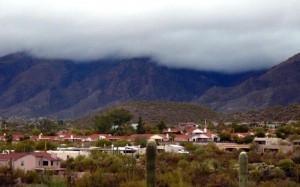 Most people think of Arizona as hot and dry. There is actually a great deal of variation in the weather from season to season and year to year. A three to four inch variation in annual rainfall may have a dramatic effect on plants, animals and insects in the desert.

Desert adapted plants have evolved to conserve moisture and to exploit opportunities when there is excess rain. In the months that follow heavy rains, there is a large crop of desert wildflowers. These flowers create new opportunities for insects. The insects respond to this increase in resources with increased reproductive potential. A few months later, the plants have produced a huge seed crop, and the insect populations have exploded. The seeds disperse causing a widespread of weeds, further producing food and harborage for the large numbers of insects. These insects and seeds become a good food source for rodents. Presented with this abundance of resources, the rodent population escalates, and they must look for additional habitats. Finally, the wiring in your car can become the packrat’s next meal.

Arizona is a very large state, exhibiting nearly every type of habitat found throughout the U.S., with the exception of oceanfront. By East Coast standards, even the cities are huge, covering many square miles and often including a wide range of elevations. Annual and seasonal rainfall may vary greatly from one part of town to another. This has a tremendous effect on the plant, animal and insect populations.

Species that were never a problem before can become tremendous pests. A few years ago in Tucson, excessive rainfall resulted in a very large growth of mustard weeds in the surrounding desert. This weed became an overabundant resource for False Cinch Bugs, a small flying insect, always present in small number, but never noticed. The population grew to such a point that for a month, attracted to the city by lights at night, the insects covered buildings all over downtown and central Tucson, creating a panic and giving the news media plenty to report on.

Other insects that are not normally a problem but are known to flare up during excessive rainfall include Boxelder Bugs, May Flies, desert termite species, lady bugs, moths, various flies, pill bugs, desert cockroach species and ground beetles. These nuisance species are harmless but may occur in such large numbers that they seem to get into everything. Of much greater concern are the more traditional pests species that may suddenly become a huge problem. These include mosquitos, termites, ants, biting flies, filth flies, scorpions, fleas, ticks, carpet beetles, centipedes, mice, packrats and the snakes that feed on them. Even populations of coyotes and bobcats will be effected by this newly abundant food resource.

Depending on the species, its food source, and its place in the food chain, it may take a few seasons or even a year for the population growth to become apparent. Spring rains will create fall termite activity and large, rodent populations the following spring.

When properly trained and knowledgeable, it is possible to anticipate and prepare for these pest flare ups. Requiring an in depth knowledge of pest biology and behavior, as well as an awareness of local weather conditions, a pest control professional can take actions to intercept many of these pests before they enter your home.

Weather, especially rainfall, is an important component to your pest control program, and in maintaining the health and safety of your family and your home.