Honeybees are not native to the U.S. Originally from Africa, they were brought to Europe where they were domesticated and bred to be gentle. In Europe, honeybees (also called the Italian bee) were kept as pets, hobbies, livestock and even as weapons of warfare! Exposed to toxic plants, they would make honey from the pollen of these plants.  When the hives were placed in the path of an advancing army, the marauding troops would consume the honey, diminishing the troop strength.  When Europeans colonized North America, they brought Honeybees with them. Here they displaced many of the American bee species, becoming the dominant crop-pollinating bee in this country. 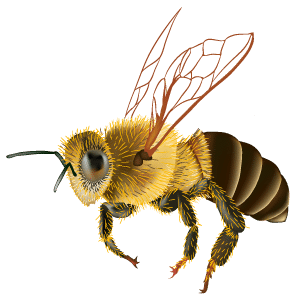 We owe much of the food that we consume to bees through bee pollinated crops, and the animals that feed on these crops. These domesticated honeybees were so docile that many bee keepers did not wear any protective equipment when handling them.  As a child, I would catch the bees in pop bottles off the honey suckle shrubs in the Bronx.  In college, as a young entomologist, I spent a whole summer handling and “training” bees with my bare hands, not knowing I was allergic, as I had not yet been stung!

“The Killer Bees are Coming!” was the Saturday Night Live sketch from 1976 that became a running gag. This was based on real world news about some “wild type,” not domesticated African bees that escaped from a research facility in Brazil. These bees had not been domesticated, and since they are the same species as the Italian bee, they were able to interbreed creating “Africanized Bees.” A little over 20 years after the Saturday Night Live sketch, the “Killer Bees” reached Arizona with tremendous media exposure. Panic ensued and misinformation that caused misunderstanding and mishandling of the bees resulted in several attacks and a few deaths. Ten years later, Arizonans have learned to live with this more aggressive bee, just like they have learned to live with scorpions and rattle snakes where incidents are rare.

Today, all honeybees are Africanized because they have some African bee genes. These bees are less cold tolerant and their northward range is limited by harsh winters. Slightly smaller than the domesticated version, these bees form smaller colonies, produce less honey and abscond (or get up and leave the hive in mass) more often. They also tend to be more aggressive, more easily agitated, and quicker to attack and appear in larger numbers. Once provoked, they are more persistent and may pursue a perceived attacker for half a mile or more. 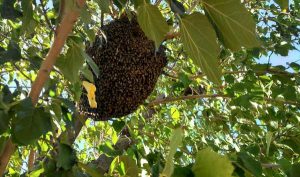 Honeybees are social insects with a complex social structure.  They tend to use the same hive year after year, with the colony growing all of the time. Periodically, a portion of the colony “buds” off to start a new colony. Gathering up a portion of the pollen and honey from the mother colony, these bees “swarm” from the hive, in search of a location to start a new hive. This swarm includes a queen bee that will be the mother of the new colony. The queen will periodically stop to rest, and will immediately be covered with swarming bees. As she rests, scout bees will look for a suitable location for the new hive. If they do not find a new home, the swarm will move on. If a scout bee does find a good location, it will return to the swarm to recruit the other bees.  If successful, the bees will move to the new location and enter within a matter of minutes, setting up housekeeping. During the swarming process, the bees do not have an active hive and therefore have little to protect. At that time, they are not very aggressive.  Exposed swarms on tree branches and other surfaces are easily dispatched, but since Honeybees are beneficial insects, and the swarm will move on shortly, the swarms should be left alone.

What to Look For

Honeybees seek out small openings that serve as entrances to voids suitable to constructing honeycombs.  A good example would be an overturned flower pot.  Wall voids, attic spaces, crawl spaces, abandoned appliances and equipment, unused vehicles, abandoned sheds and even large children’s toys all can become sites for a new bee hive.  The best form of bee control is prevention, eliminating potential hive sites or sealing up openings that might allow access to these sites. 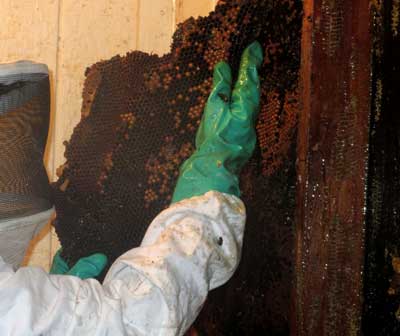 An experienced Bee Control Technician can help identify these potential hive sites and determine the best way to seal them. Unfortunately, sometimes homeowners are too late in trying to prevent bees and a colony establishes in or around their home. At this point, with something to defend, bees can turn aggressive and may annex large areas of the property as their territory.  Africanized bees will set up sentries to fly CAP (Combat Air Patrol), patrolling this territory. If a person enters this defensive zone, the sentries will dive and body slam the person as a warning not to approach closer. If the warning is not heeded, zap… you are stung. The sting includes a pheromone trigger that causes additional bees to sting.  If attacked, run in a straight line for a half mile, or get in doors.  Do not dive into a pool. The bees will wait for you to come up for air.

Do not attempt to eliminate the bees on your own.  This is how people were injured or killed when the Africanized bees first arrived in Arizona. A specially trained University Termite & Pest Control Bee Control Technician is experienced and skilled in bee removal in Arizona. He has the appropriate safety equipment to allow him to deal with bees. Once the bees are eliminated, if the hive was in the home or a wall void, the dead bees, honey and honeycomb (wax) must be removed. Without the bees to maintain all of this organic material, it will begin to rot, smell and attract other pests.  Your Bee Control Technician can also assist in determining the best course of action.  It is best to prevent bees, or at the least, eliminate them as soon as a hive is discovered.