Tuscon’s Busy Bees and Their Benefits 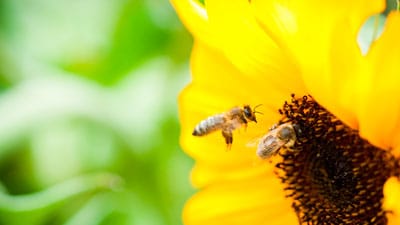 If you hear a buzzing noise, you may be in Tucson.  According to desertmuseum.org, “The region around Tucson, Arizona is thought to host more kinds of bees than anywhere else in the world…”  While bees often get a bad rap, three important benefits that bees provide are pollination and the production of both honey and beeswax.

Most Valuable Group of Pollinating Animals in the World

“Bees are responsible for one out of every three bites of food we eat,” according to the Michigan State University entomology department. Except for the cuckoo bee, all female bees search for nectar and pollen from blooming plants to feed themselves. This foraging results in the transfer of pollen from the anther (male part of the flower) to the stigma (female). Roughly 80% of flowering species located in the Tucson Mountains have adapted to bee pollination.

Honey is another benefit that bees provide, and it’s not just its great taste. While honey may not have miraculous healing powers, researchers are proving that it has many health benefits. Honey possesses antibacterial properties and has been used effectively to combat and kill dozens of bacterial strains, including salmonella and E. coli. It has been used to treat burns, skin sores, inflammation, and ulcers. Studies have also found honey is more effective than both dextromethorphan and the antihistamine diphenhydramine in relieving coughs and improving sleep in children.

Beeswax sometimes called the “duct tape of old” has been identified on sunken Viking ships, in the Roman ruins, and on tombs of the pharaohs in Egypt. Amazingly, this ancient wax is still in usable condition when heated. It makes up the honeycomb structure, and to this day, it is a valuable component in numerous industries and is also good for the body. Wax, taken directly from the honeycomb, is yellow or brown in color, due to the mix of pollen oils and wax. White wax is the result of chemical filtering or bleaching. Beeswax is a valuable thickener, emulsifier, and stiffening agent used in food and beverage industries, and it is also used in a variety of manufacturing businesses, including cosmetics, woodworking, and art. Beeswax has been found to have therapeutic health benefits when eaten, such as:

Bees love Tucson, and they bring benefits. There are also drawbacks. Call for professional help if a beehive is located too close for comfort or it becomes too populated.