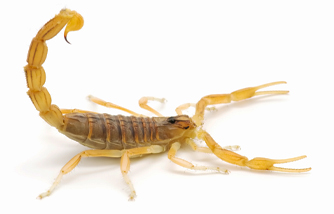 Arizona and the Sonoran Desert are known the world over for Saguaro cactus, high temperatures and scorpions.

Scorpions are common and plentiful in Southern Arizona, but they are very secretive and nocturnal. Some people have lived their whole life in Arizona, but have never seen one. They are typically neutral in coloring, ranging from a translucent straw color to a striped brown, allowing them to camouflage easily on most natural surfaces. Depending on the species, adults may be just over one inch in length or may be up to three inches long. Scorpions possess a toxic sting at the tip of the tail; as a result, the tailless species are harmless! Even the ones that do sting can be relatively harmless, much like a bee sting (if you are not allergic to bees). In some species, the sting can be extremely toxic, causing severe symptoms in some people or even death in the elderly or in infants. With scorpions, bigger is better, with the larger varieties possessing the mildest sting, and the smallest with the most toxic.

Scorpions are arthropods, related to spiders, with eight legs and a pair of pincers that are modified mouthparts. They are beneficial, feeding on cockroaches, crickets, and other pest insects. They are attracted to moisture and rocky hiding spaces. They will also hide in wood piles, wood construction and behind loose bark.  At night, scorpions come out to feed, mate or just “porch sit” near their hiding spaces. A nighttime inspection of the home, armed with a ultraviolet “blacklight,” they can be found. Scorpions, live and dead, will fluoresce or glow under the light of a blacklight. Scorpions enter homes by accident in search of food, moisture or shelter. Once inside, they can’t find a way out and generally do poorly due to lack of food and other environmental conditions.

Some of the most harmless scorpions are also the fiercest looking.  Vinagaroons or whip scorpions possess a “whip” in place of the conventional tail with stinger. This whip is designed to sling a mild acid in the face of predators. The acid smells like vinegar, giving the animal its name. Solpugids or sun spiders are actually tailless scorpions. Resembling large, fast moving spiders, the “pincers” are attached directly to the head without being on the “arms.” This gives the arthropod a pair of side-by-side huge jaws that look frightening. Though they can give you a pinch, Solpugids are harmless. They can be seen sunning themselves on the side of buildings.

The three most common, conventional scorpions are the small straw colored bark scorpions; the larger, more robust striped tail scorpions; and the large, not so hairy, giant hairy scorpion. The bark scorpion is the most dangerous with the most toxic venom, and its’ sting can be lethal to small children or the elderly. Being small and flat, they easily enter buildings. Larger species do not need the toxic venom to subdue their prey and often don’t even attempt to sting the insects they capture, relying on brute force to restrain them.

Any control program has three steps: habitat reduction, elimination of food and exclusion.

Habitat reduction involves eliminating brush piles and excess debris. Rocks used for swale should be fitted and set in the soil. Rock piles that have no use should be eliminated. Wood piles should be stacked neatly and raised off the floor.  Shrubs should be trimmed to raise the vegetation off the ground.

Elimination of food means to address the pest species that make up the food of scorpions, primarily crickets and cockroaches. These insects occur in abundance in the desert, and they are attracted to homes due to irrigation and food materials. Proper sanitation and general pest control services will reduce these insect populations.

Exclusion consists of sealing cracks and crevices that may allow scorpions to enter the home.  To properly scorpion-proof a home, knowledge of the biology and habits of scorpions is essential. Able to enter through cracks no wider than a matchstick, exclusion work can be both tedious and time consuming. Pest control experts possess the knowledge and materials to effectively prevent scorpion entry and protect your family.