Scorpion Sting: 5 Facts That May Save Your Life 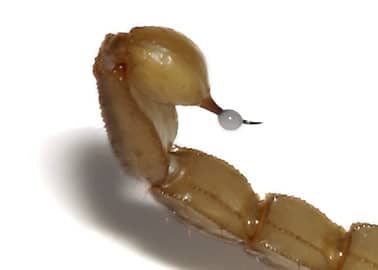 If you have lived in Arizona for more than a day, you probably have already encountered a scorpion. Between the Arizona Stripedtail, Arizona bark, and Arizona giant hairy scorpions; this state is practically crowded with these pesky arachnids. However, if you are lucky you have never been stung by critters. Let’s lift the veil of mystery around these creatures and learn the hard facts about scorpion venom.

1. Scorpion Venom Is Essential to Their Survival

As scary as they may look, scorpions are extraordinarily small and vulnerable creatures that need to compete with vicious rivals as well as larger predators. Their 5-segmented tail ends in a final segment called the telson where the venom is produced. This venom is delivered by a stinger called an aculeus that is sharp and durable enough to penetrate the human epidermis and deliver a painful sting. Scorpions actually have the ability to regulate how much of their venom they deliver in a sting and it will depend on whether they are trying to kill prey or protect themselves from predation.

2. Scorpion Venom May Not Be as Dangerous as You Think

While most scorpion stings are not going to be a fun experience, you may be surprised to find out that many are no more serious than a bee sting and may be less harmful than a spider bite. The large majority of scorpion species produce venom that is painful but not permanently harmful to humans.

3. There Are Good Reasons to Steer Clear of Scorpions

The fact is, only about 10% of scorpion species produce venom potent enough to be dangerous to humans. Unfortunately, one of them is the Arizona bark Scorpion which is a native of the Grand Canyon State. This species is especially dangerous for small children, for which the venom can be lethal. If stung by this species, immediate medical attention must be sought; there is an antivenom treatment for this sting.

4. Symptoms Can Be Terrifying

Most scorpion stings are merely painful, but the more serious variety such as the venom produced by the bark scorpion can be extremely frightening. The most immediate effect will be an inability to stop the flow of saliva and you may even foam at the mouth. Your vision may blur and you might have problems with focus or hand-eye coordination. Victims may be afflicted with slurred speech as if they have been drinking, and demonstrate uncontrollable muscle movements. The final, and sometimes fatal, symptoms are seizures and respiratory failure.

Surviving a deadly scorpion sting depends on immediate action. If anyone in your home is stung, you should immediately call 911 and wash the area with soap and water. A combination of cold compress and elevating the affected limb will help to manage the pain until help arrives.