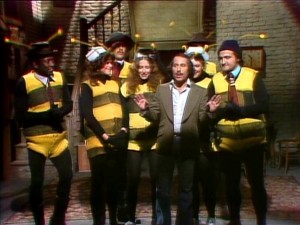 “The Killer Bees are Coming!” was the Saturday Night Live sketch from 1976 that became a running gag. This was based on real world news about some “wild type,” not domesticated African bees that escaped from a research facility in Brazil. These bees had not been domesticated, and since they are the same species as the Italian bee, they were able to interbreed creating “Africanized Bees.” A little over 20 years after the Saturday Night Live sketch, the “Killer Bees” reached Arizona with tremendous media exposure. Panic ensued and misinformation that caused misunderstanding and mishandling of the bees resulted in several attacks and a few deaths. Ten years later, Arizonans have learned to live with this more aggressive bee, just like they have learned to live with scorpions and rattle snakes where incidents are rare.