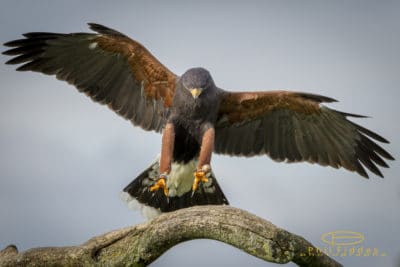 Hawks are the most numerous of our native raptor species. Whereas we talked about two different kinds of owls, and two falcons, the desert southwest is home to four different species of hawks. They vary in size, diet and nesting areas more substantially that any of our other raptor species and have the distinction of being responsible for a common sound effect used for just about every kind of predator bird you have ever heard on television or on the radio. 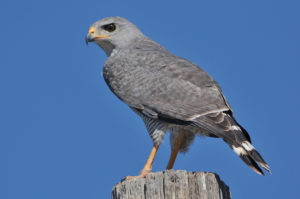 The gray hawk is the smallest of our raptor hawks. With a weight of only 378-750 grams and a wingspan of 82-98 cm, these hawks are also the biggest success story of all our hawk species. They were at the brink of extinction with only 80 known nesting pairs in Southern Arizona. Over the last fifteen years, through the efforts of conservation and careful observance of where they are nesting, their numbers have increased to 200 nesting pairs. They prefer to nest high in trees producing 1-5 eggs in a small cup shaped nest. They prefer reptilian prey, especially lizards. 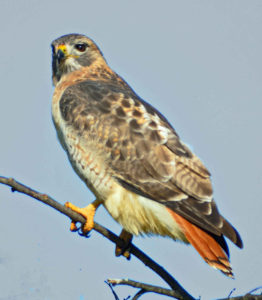 The red-tailed hawk is also found here in Southern Arizona, but in actuality, it is found all over North America. They also have the distinction of a very identifiable “scream”. In fact, just about every time you have heard a bird screech in a movie, on television or elsewhere, regardless of what bird is being shown, the red-tailed hawk screech is used. They are slightly larger than their grey hawk cousins weighing 690-1460 grams and having a wingspan of 114-140 cm. They also nest high up, in just about any place they can build a nest. Poles, saguaros, buildings, etc. are great locations for their nests, which can contain between 1-5 eggs at any given time. They are a much more generalist hunter and will feed on birds, rodents, reptiles or even an occasional amphibian. 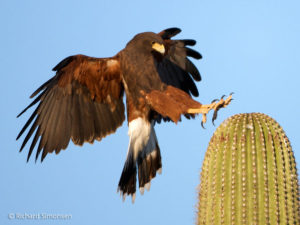 The harris hawk, aside from its visual distinction from its fellow hawks, with dark brown to red plumage, has the honor of being one of only two types of hawks to hunt in groups. Some have dubbed them the “wolves of the air” for the behavior they display. Hunting in family groups of 3-7 birds, they will take turns harrying a rodent, chasing it into the waiting claws of another. This cooperative hunting is only seen here in the Sonoran Desert. They typically weigh between 600-1300 grams and have a wingspan of 103-124 cm and will nest in tall trees, or saguaros.  Their cup-like nest contains 2-6 eggs when in season. 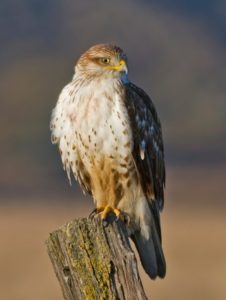 The ferruginous hawk is the largest hawk in North America. Weighing 970-2074 grams and spreading out to 133-152 cm, this bird does not differ from the other hawk by size alone. This bird is very comfortable being on the ground. In prairie like conditions, they will nest on the open ground. It seems that this bird has unusually small feet compared to their body. They use these feet to ball up and punch holes into the burrows of rodents to catch their prey. In fact, their most common source of food is prairie dogs. They can actually pull the rodents right out of the ground with their hunting activity.
These are the most prominent raptor species that we have in our Desert Southwest. Thank you for following along as we learned to appreciate them as vital parts of our environment.