Owls in Arizona – Who’s Who among the Hooters 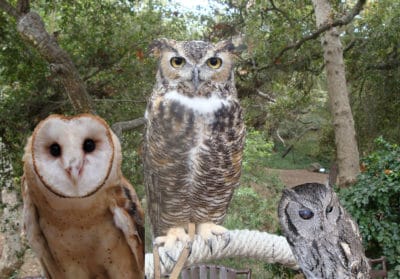 I sat down and began my research for this blog, which was originally going to be about raptor birds in Southeastern Arizona. Using the Sonoran Desert Museum as my launch point, I quickly changed my mind and decided to break them down into three distinct categories: hawks, owls and falcons. There will be one notable raven thrown in, but the three categories suffice for what I wish to accomplish.

First of all I have to admit, I do not like birds in general. As a young boy, I was bit by a cantankerous parrot at a bird farm in Florida. Call me prejudiced, but I carry the animosity from that experience into my views on birds as a whole to today. However, in reading about the two most popular raptor owls we have here in Southern Arizona, the great horned owl (no real horns) and the barn owl, I was fascinated all over again with their beauty, grace and yes, their savagery. 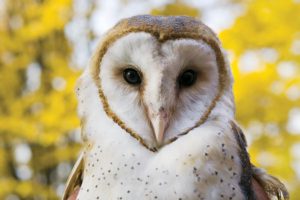 The barn owl is the most common owl, and is found everywhere man is found, with the exception of Antarctica. This owl is typically 13-15 inches high and has a wingspan of 33-37 inches. They are typically grey to light grey here in the desert southwest and are virtuosos of rodent hunters, which alone helps me get over my fear of birds. It has been estimated that a single owl can capture and consume over 2,000 rodents in a single year! They are also more prolific than their great horned cousins, laying as many as eleven eggs at a time.

Speaking of owl nests, if you are intent on finding one, you are in for a tough battle, as they do not build nests. They will take advantage of abandoned nests of other birds, use caves and outcroppings in wall faces to hollow out a small area to lay their eggs, but they do not build their own nests. Furthermore, if you locate a nesting site being used by an owl, the young are just as aggressive about defending their space as the adults. 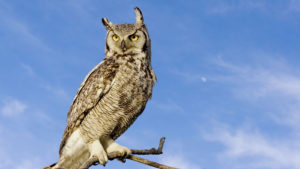 The great horned owl earns its namesake by not just its features, which make it appear to have horns on its head, but by its size. A great horned owl will be 19-25 inches tall and have a wingspan between 3-5 feet in width. Like the barn owl, it excels at silent flight as it dives in on its prey. Because they are larger, bigger prey come into the picture, although rodents are its mainstay, rabbits and ground squirrels are in play for this giant raptor. I personally witnessed one of these birds in the wild several years ago while at a reception at La Paloma Resort. It was perched on the building’s edifice and sat there overlooking the crowd for at least a half hour. When it decided we were all too large to be legitimate prey, it took off, gliding at a frighteningly fast rate. It went nearly directly overhead of myself and a group of my friends. There were no beating of wings, no squawks or other sign of its passing, except for the practically silent “whoosh” as the five-foot-wingspan raptor passed over us.

I have discovered a newfound respect for the owl in writing this article. Besides helping me keep the rodent population down, they are truly beautiful in flight. Check out the Raptor Free Flights at the Arizona Sonoran Desert Museum. This is an opportunity to get up and close to see these birds in free flight, up close and personal.