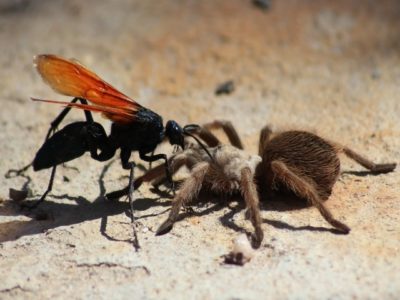 During warm summer weather, bee stings and mosquito bites are taken as par for the course. But, you would be surprised to discover that summer is not necessarily the season that is most dangerous when it comes to stinging insects. In fact, fall is a time of year when close encounters with insects likely to sting are most likely to happen. Here are five species of stinging insects that you should watch out for this fall.

Carpenter bees are an unusually solitary version of the bees that you know and love. While they will go into hibernation in the winter, they become more aggressive in the fall as their supply of nectar precipitously drops off, forcing them to look for other sources of sweetness such as those available in human households. They can also be a property damage threat as they can cause gradual degradation and damage to the wooden structures in your home as they bore the small circular holes where they make their home. Only the females sting, although both genders have a tendency to aggressively fly toward the face of humans that get too close to their nests.

Possibly the most ornery insect in Arizona, wasps are extremely territorial and the yellowjacket adds its own particular bad temper to the mix. They are easily identifiable and distinct from other wasps by their brilliant yellow and dark black stripes. When disturbed, they can sting over and over, injecting painful neurotoxin. Yellowjacket swarms have been known to send those that disturb their nests to the emergency room.

These bees are not as common or as feared as the Africanized honeybee, but they present a danger to humans because of their tendency to nest close to human habitats. Their hives can be found in sheds, attics, and under patios or decks. Although there is not much to differentiate them from any other bumblebee, their sting is unusually painful, described as a corrosive burn.

This aggressive predator of the tarantulas that you may have seen around your property is also a significant threat to humans. It is huge and frightening to look at, often reaching an absurd 2 and 1/2 inches in length, but its sting is much worse. Described as similar to being exposed to an electrical wire, its sting is one of the highest on the Schmidt Pain Index, coming in at a four.

After the horror of the tarantula hawk wasp, these probably seem tame by comparison. However, their close proximity to the welcoming environment of your home and garden makes them one of the most common stinging insects to encounter. Although not naturally aggressive like yellowjackets, they vigorously defend their nests and unfortunately tend to build nests in places such as your attic or corners in your garage.

If you think that these stinging species are living in or near your home, please call University Termite & Pest Control immediately for a no-cost consultation and home inspection.