Is it a springtail or a flea? 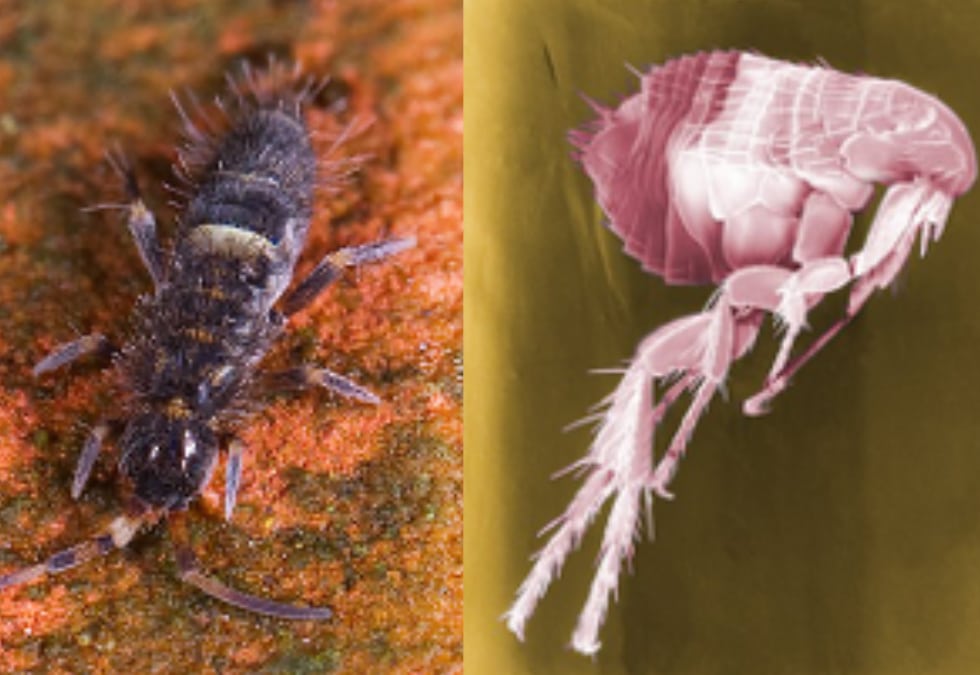 Now’s the time of year when we’re plagued by two entirely different types of “fleas.” The springtail, or snow flea, is a reasonably harmless insect, yet it’s a sign that your home is too damp. On the other hand, an actual flea is a serious pest with potential health consequences for your family and pets.

How can you tell them apart? In this post, we’ll take a close look at each of the two insects. We’ll go over how to tell them apart and how to rid yourself of either or both types of fleas quickly.

Is it a springtail or a flea?

Here in Tucson, we’re “blessed” with an ideal climate for all kinds of pests and critters. Many types of insects live here, and both springtails and fleas tend to appear in large numbers beginning in November.

From a distance, springtails and fleas appear similar: They’re small, they both “jump,” and they both have a worrisome tendency to show up in homes with pets. Yet, there are important differences that you can easily see.

The flea is a small wingless insect with a dark reddish-brown color. If you happen to feel one between your fingers, you’ll notice that its shape appears flattened from top to bottom. It’s an adaptation that allows them to move along and under their hosts’ fur.

A true flea has thick, strong legs. This enables them to move relatively long distances when disturbed quickly.

On the other hand, a springtail or so-called “snow flea” is multi-colored instead of dark brown. And, they don’t have any stout legs for jumping.

Instead, as their name implies, springtails move by coiling, releasing a spring-like appendage located at the end of the tail.

This V-shaped appendage is called a furcula. It can propel the insect at a remarkable speed of 4 feet per second, with a maximum jumping distance of 100 times their body length.

As a practical matter, the springtail typically jumps about 12” as its standard escape move. It’s interesting to note that the insect’s landing direction is entirely random.

In other words, the so-called “snow flea” seems to have no control over where it will land. People tend to become frightened when the insect randomly jumps on them, even though it’s harmless and can’t bite.

In contrast to the unluckily-named snow fleas, the real fleas that we have here in Tucson and throughout Arizona present a significant threat to our families and pets’ health. Everyone knows that adult fleas are blood-sucking parasites. They have piercing mouthparts for biting and sucking nourishment.

We’re often called to eliminate fleas, especially beginning in the Fall months. We usually discover that the infestation started with a household pet – The animal spends most of its time indoors, yet it goes outside often enough to encounter fleas and ticks.

Here’s the life-cycle: Fleas lay their eggs on the host skin. When an egg hatches, the larva drops off its host and looks for a protected location.

After hiding itself in a quiet location, the larva begins to develop through the pupal stage. The pupa is entirely immobile.

Once developed into an adult flea, the insect waits for a warm-blooded host to pass nearby. Then it jumps on and begins feeding on the new host, ready to produce another brood of eggs.

Both types of “flea” should be removed.

The habit for springtails is outdoors in the soil. Yet, they can also be found inside buildings or other places with high moisture. So, you’ll often see them in gardens and woodpiles or under logs and stones. Even though they usually live outdoors, they’ll move inside buildings if they find dampness.

When there’s an infestation indoors, it’s nearly always in a basement or crawlspace or a too-damp bathroom or kitchen. They feed on mold and mildew.

Since they don’t bite – at least not humans – springtails are hard to see until they jump. Still, springtails should be eliminated, and here’s why….. Springtails are the warning sign of an unhealthy living condition for humans.

Even though these insects are harmless, they’re a clear sign of too-damp conditions. Whether you find them in your crawlspace or bedroom, springtails live by eating fungus. That’s not a healthy environment for humans, and it should be dried out.

So, if you have snow fleas as house-guests, you should contact our expert pest-removal team. We can quickly discover the infestation cause, and we’ll help send these harmless insects to live elsewhere.

We can solve a serious flea problem very quickly.

In contrast to its harmless cousin, the blood-sucking flea is a serious pest that doesn’t belong in your home simply because it’s dangerous to humans and pets.

Fleas cause painful, infection-prone bites on people and animals. Sometimes the bites cause dogs and cats to lose their fur because of frequent scratching.

On a heavily-infested pet, you’ll see tiny bits of dried blood called “flea dirt,” especially on the lower abdomen, the base of the tail, and other places where they can’t reach to scratch. It’s painful to watch animals suffer.

Of course, kids are equally vulnerable. That’s why it’s so important to eliminate fleas from your property.

If you’ve seen any unknown or worrisome insects around your home or business, we can help. We’re Tucson’s leading pest control service when it comes to evicting springtails and eliminating fleas.

Want to know if that critter is a springtail or a flea? Just contact us!

Learn more about springtails and fleas