Hantavirus infections are caused by human contact with hantavirus infected rodents, or their urine and droppings. The Hantavirus has numerous strains. The most common strain, found in the southwestern U.S., is called Sin Nombres. The infection can progress to Hantavirus Pulmonary Syndrome (HPS), which currently has a mortality rate of 36%.

HPS dates back to 1951. Arizona is ranked third highest for reported cases in 35 U.S. States. It has also been reported in Brazil, Chile, Argentina, Paraguay, Uruguay, Panama, Ecuador, Venezuela and Canada, making HPS a pan-hemispheric disease.

The most widely reported outbreak occurred in 1993 in the Four Corners region of Arizona, New Mexico, Colorado and Utah. The source was tracked to the species of deer mouse, whose population had increased approximately tenfold due to extensive rainfall that had occurred during the previous winter. This created a plentiful food supply and enabled a rapid growth of the population. Approximately 30% of the deer mice trapped tested positive for the infection. 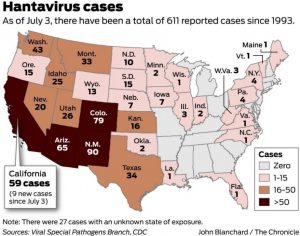 Other species of rodents such as the white-footed mouse, cotton rat and rice rat have also been confirmed as carriers of the Hantavirus in other areas of this hemisphere. This is most likely due to heavy snowfalls and/or rainfalls, which create an abundant food supply and lead to population growth. More rodents mean more possible contact with humans.

Most cases of HPS occur when people come in contact with Hantavirus infected rodent droppings or urine and then touch their nose or mouth, or when they consume food that has contaminated by rodent droppings or urine. The most common method of disease transmission is airborne, created by sweeping or vacuuming. Bites from an infected rodent could result in the disease, although it is rare. Transmission cannot occur from person to person or by any physical contact from person to person, nor can your dog or cat transmit the disease to you.

Reduce your potential exposure to HPS and the possibility of contracting the disease with these tips:

If you think you have rodents, it is important to act quickly to control the level of infestation and reduce the health risks posed by these rodents. Call University Termite & Pest Control today!