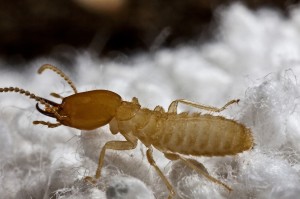 Introduce a foreign dish or person into your home and watch your family react.  Drop them or it right in the middle of the living room or the dinner table and watch the fireworks fly. This is a theme that has been tackled in movies, plays and television for years.  Sidney Portier depicts this guest of honor in a 1967 classic, and (no pun intended) ‘brought the issue home’ for many Americans. Coincidentally, it was also during the 1960’s that the Formosan Termite was first discovered within the Continental United States.  Texas, Louisiana and South Carolina were the first unfortunate recipients, and later this same species was discovered thriving in Florida.  Formosan termites were then, and continue to be, the most aggressive and destructive timber pests in the United States. Unlike the gracious Mr. Portier, these guests are never welcome at anybody’s table or in any home.

The Formosan Termite cultivates a massive nest containing millions of insects.  They relentlessly and aggressively seek out and consume anything with cellulose, or fiber, almost seeming to target the crucial supports in most structures.  Any type of wood, including utility poles, docks and other vital wooden structures are at risk.  Very few things are impervious to infestation from this pest, including living trees. Formosan termites have been found in everything from Oak and Cypress to Pine and Maple trees, even while the trees were still alive.  More troubling still is the electrical cabling and lead shielded wiring that does not remain untouched during their foraging activities.  From power cables to wires in cable boxes, all have come under attack and suffered failure with this insect around. This termite is indeed a force to be reckoned with!

Such a formidable foe also presented a significant degree of challenge to the pest control industry when it came to creating effective control strategies. In the spirit of cooperation, the full force of the pest control industry banded together and was brought to bear in attempting to eradicate this pest. Every product, from pressure treated woods, structural fumigant, liquid termiticide, even the newest and most exotic baiting products, have all been used against this tenacious pest. Each new product developed performed with varying levels of success, yet none of which totally abolished this particularly determined species.

To date, we have learned that this termite can and will work around pressure treated wood in an attempt to find the untreated wood within a structure.  Attacking this insect on its home turf has proved a challenge as well.  The “carton”, an almost impenetrable structure it builds around the exterior of its nest, protects the colony from the effects of fumigants.  Early generation liquid termiticides were also rendered essentially useless, as the carton is also water and moisture proof and these products were evaded or defeated. Newer generation liquids have shown more efficacy, but the data is far from conclusive that they are the answer.  Bait products, especially the newest generations, are showing great promise, but these require careful evaluation and monitoring to ensure efficacy.   Once the ingenuity of man finally gains the upper hand, it will likely be a “tool box “approach that works best with this species of termite.  This is several different techniques being deployed at once in conjunction with one other, each method taking advantage of the best qualities each approach offers, and compensating for any weaknesses of another.

For all of us in sunny Arizona, the Formosan termite has never been identified anywhere within our state, and at this time is unlikely that it ever will.  Many experts believe our environment lacks the moisture needed to support this termite’s existence.  On the map, Tucson is located at 32° N latitude, and the Formosan termite is rarely found north of 35° N latitude.  This puts Tucson and all of Southern Arizona square in the prime target zone for Formosan activity, but fortunately we lack humidity that the Formosan seems to crave. The distribution of this pervasive pest will probably continue to be restricted to mostly southern areas since their eggs will not hatch below roughly 20° C (68° F). Thus far, this insect has relegated its activity to areas around the globe where humidity remains high year round. Lucky for us, and as the familiar saying goes, “It’s a dry heat!”