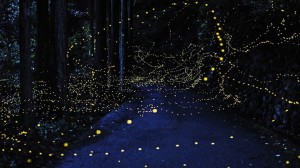 Not often do people use words like bugs and beautiful in the same sentence, and it’s even less often that insects become art. The Smithsonian though, recently highlighted in their magazine gorgeous photographs taken by Tsuneaki Hiramatsu of fireflies. Hiramatsu, who is described by the Smithsonian as an “amateur” shot these amazing exposures of fireflies during mating season in forests outside Niimi, in Japan. He then “He then digitally merged the images, creating connect-the-dot photos of the fireflies’ golden flight paths”. They were a sensation, and the images became part of the Smithsonian’s traveling art exhibit. For areas like Tucson, where don’t have the opportunity to witness things like this, it’s nice to have the chance to share in what Hiramatsu describes as the ”splendor and mystery of nature”.

So, are there any insects that you find beautiful, let us know in the comments!

Read more on the Smithsonian’s page on this exhibit.