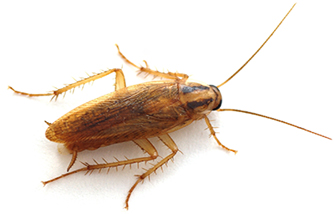 There are several different types of crickets in Southern Arizona that a homeowner may encounter. The two most common are the field cricket and the Indian house cricket. The field cricket is a native cricket. They are black, round in cross-section, larger and, except for the wings, shiny. As the name implies, they are found primarily out doors in areas with lots of vegetation or weeds. They are sometimes found under rocks or leaf litter. The Indian House Cricket is a brown cricket that people buy from pet shops to feed to their pet lizards. They are dull looking and kind of square in cross-section. They can be found in homes and stores.

Wet weather favors crickets that congregate in garages, crawlspaces and yards, making noise into the night. The sound that crickets make is actually created when male crickets rub their wings against each other. Females and immature (wingless) crickets do not make any noise at all.

For the year following excessive rains, huge cricket populations can build in the desert and around homes. The species most commonly infesting homes is the familiar, tan Indian house cricket. They collect in small cricket communities not unlike the “nests” of cockroaches, to whom they are related. Their droppings are dry and granular and may be mistaken for termite droppings to the untrained eye. During the monsoon season and into the winter, odd individual field crickets can be found running through living rooms or bedrooms at night.

Three other crickets that can be found in Southern Arizona, and somehow seem to be found by homeowners are camel crickets, cave crickets and mole crickets. These odd-looking animals are all named after their odd appearances and the locations where they are found in the desert. In fact, they are so odd looking that many people may not recognize them as crickets. As none of these crickets have significantly developed wings, they are all silent and are unable to chirp. Cave crickets are found in small caves and rock piles in the desert. Camel crickets are humpbacked with long antennae. The mole crickets are found underground and are most often encountered when digging. These crickets seem to frighten people, and we often tell of “old wives tales” about them. Another “mock cricket” should also receive a mention here. Several times a year, a homeowner will report hearing a chirping cricket, but will not be able to find any insects. Upon professional evaluation, a smoke detector is the culprit, chirping to alert that the battery power is low.

Crickets are versatile and may feed on dog food, fruit, nuts, cereal, glue, paper or even dead insects. They like cracks, crevices and clutter and can be found in cracks in the pavement, meter boxes, attics or anywhere in between. Once they establish in a home, they can build large populations quickly. A garage cluttered with cardboard boxes can support a huge number of crickets. In nature, they serve as food for lizards, spiders and scorpions, attracting these animals to the home. Any control program for spiders and scorpions must first concentrate on eliminating crickets.

Controlling moisture, clutter, leaf litter and food sources are key to eliminating crickets. Ensuring that doors seal tight and that cracks are repaired is also important in stopping cricket infestations. Weeds around the home should be eliminated, and shrubs should be trimmed to raise the crowns so that branches do not lie on the ground. Dead cacti need to be cleaned up to eliminate cricket harborage. Your professional pest control technician is trained in the habits of crickets and has the materials necessary to get rid of this persistent annoying pest.

Call us today to find solutions to your cricket problems.