Bedbugs, At Home, On Vacation, and Around Town 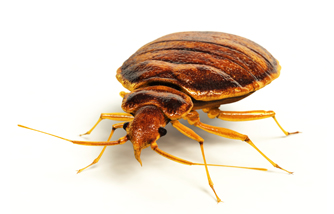 BEDBUGS AT HOME, ON VACATION AND AROUND TOWN

Bedbugs have become one of the most important pest species in the U.S. All you have to do is open a newspaper or surf the net to hear stories of people whose lives have been changed by a bedbug infestation.

It is generally believed that a pest of bats called batbugs evolved to feed on humans when our prehistoric ancestors began to dwell in caves. Today, only an entomologist can tell a batbug from a bedbug, primarily by the spacing of the eyes and the arrangement of hairs on the insect’s body.  The bite of a bedbug is nearly painless, and they are not known to carry any disease organisms.  A significant portion of the human population is allergic to the bite and the adverse effects can be severe.  The reproductive rate is very high and bedbug infestations can be huge.

During the hard economic times, people are buying or picking up second hand furniture and bedding, inoculating their home with bedbugs. Many dormitories are also infested with students exchanging furniture and bedding, bringing home bug problems.  Since bedbugs are most active in the early morning hours, before sunrise, most people are unaware of an infestation for many months.  Many people assume that they are only found in beds, but they can be found in any room of the home in furniture, clothing, luggage, wall voids, under carpets, and electronic equipment.

With their secretive behavior, they can be difficult to detect with inspection, and special training is required to become a competent bedbug inspector. These inspections can be augmented with monitoring traps or specially trained locator dogs.  When an infestation is identified, a program is developed to eliminate all bedbugs from the home.  In the case of apartments or condominiums, adjacent units must also be addressed. The control program may include all or a combination of the following:

Bedbugs are not the result of poverty.  Bedbugs are associated with human social interaction.  The more people come and go, the greater the chance of spreading bedbugs from one infested site to another susceptible site.  In the U.S., most vacations are of fairly short duration. It is not uncommon for a family to stay in several places during a 1-2 week vacation, sometimes for just a single night. Each time a family changes accommodations, it increases the chances of coming in contact with bedbugs.

Hotels in popular vacation cities are particularly prone to bedbug infestation. When bedbugs bite, it often takes three or more days for the “bites” to appear and by the time they do, the guest has moved on. The infestation may go unreported for weeks, giving the population a chance to grow. Bedbugs can hitch a ride in folded clothing, suitcases, briefcases and coats.

When first arriving in hotel rooms, the mattress, bed frame and headboard should be examined carefully for signs of bedbugs. One trick is to take a hair dryer on high setting and run it around the headboard, mattress, nightstands and baseboards to see if these insects are “flushed” out. When removing clothing from hotel dresser drawers, they should be examined closely for hitchhikers.

You do not need to stay in a hotel to pick up bedbugs on vacation. They have been found in taxicabs, busses and on airplanes. It has been demonstrated that they will transfer from an infested suitcase to a clean one during inflight travel!

Lately, there have been stories in the news of bedbugs found in unusual places. The reality is people try to keep these problems quiet. For every infestation you hear about, there are dozens that do not make the news or remain undiscovered.

Finally, bedbugs are becoming an ever-increasing problem in the workplace. Locker rooms, cafeterias and office cubicles become infested as more of the employee’s homes become infested. If there are large numbers of people coming and going, and there are upholstered surfaces, there is a risk of bedbug contamination and infestation.