Bed Bugs on the Rise in Tucson 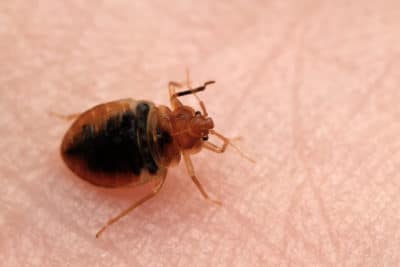 We’ve all heard the expression, “Snug as a bug in a rug.”  For those of us who reside in Tucson, the phrase takes on totally different connotations. If the bug that’s made itself comfortable in your home is red, and it’s not alone, you may have a problem on your hands.

KGUN9-TV recently reported that bed bug infestations are increasing in the Tucson region. According to the University of Arizona, numerous local exterminator services are describing higher numbers of calls per day complaining of the bug’s infiltration of area homes. Although Tucson is not a city renowned for high bed bug infestations, increased numbers of travelers and the hot, humid weather are contributing to the rise.

Bed bugs are small, paper-thin, oval-shaped insects about 5mm-7mm in length; they’re reddish brown in color and non-flying. Their preferred diet is human blood. These pests are most active at night, typically hiding in tiny crevices near areas where people sleep, including box springs, mattresses, bed frames, and headboards. However, it’s not uncommon for bed bugs to travel as far as a 20-foot radius from their hiding spot to feed on a human host. These insects do not nest, but generally congregate in habitual hiding places.

A female bed bug typically deposits one to five eggs daily, which adds up to hundreds in her lifetime. At normal room temperatures, eggs hatch in approximately a week. Bed bugs molt, and while reaching maturity, they shed their skins five times. Between each molting, they feed voraciously.

Bed bugs prefer temperatures of 70 – 80° F and, when conditions are favorable, they mature in about a month. This results in the production of multiple generations in a single year. If temperatures are cooler, or they have limited access to blood meals, development is slower.

Traveling is the most common way that bed bugs enter a home. Adult bed bugs can survive up to 18 months without a feeding source, and this lengthy dormant period makes them ideally suited for hitchhiking. They travel from destination to destination, on clothing, luggage, furniture, or pets.  Signs of an infestation include:

Because bed bugs have developed resistance to many of the chemicals available on the market, hiring a professional exterminator service is the most effective method of eradicating an infestation. An exterminator service might use various strategies, including heat and steam, chemical sprays, and dusting powders that physically damage the bugs. The best exterminator services take a multi-tiered approach and will conduct at least three inspections, often applying subsequent treatments at two-week intervals.

The bed bug infestation nationwide trend is now impacting the area, reports Tucson News Now. Once they move in, they don’t move out.  An exterminator service will identify their presence and develop a strategy to eliminate these pests from your home.