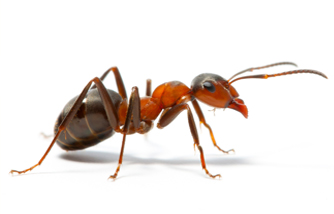 Arizona is the number one state for ant diversity. There are well over 100 different ant species!  It would be impossible to describe all the different types briefly. Let’s cover some ant basics and group ants by how we might find them.

Ants are social Insects. They live in a colony with the work divided among the various insects in the colony.  Little ants do not grow into big ants. Baby ants are grubs:  Small short legless larvae that are incapable of moving around and taking care of themselves.  They serve a critical function in most ant colonies.  Adult ants are incapable of digesting food, so they feed it to the grubs who, in turn, digest it and regurgitate it to the adults. The grubs collectively serve as the stomach of the colony.

Reproduction is limited to only a few individuals with egg laying restricted to one or more queens. Smaller ants serve to care for the eggs, larvae and pupae (a resting-transforming stage between larvae and adults).  Large ants may serve as soldiers, responsible for carrying large loads long distances. Ant species may be monomorphic with all ants being the same size or polymorphic with over a dozen different sizes, some with different shapes and features. Some species will form a single collective colony while others will set up a network of colonies, all connected together with trails.

Ants in the Home

Ants have adapted to human habitation and have probably been a nuisance to humans since man first lived in caves. Most ants are scavengers, taking advantage of nearly any organic material that they find. Many species have become specialists on a particular type of food such as proteins, fats, starches, or sugars.   Ants are sensitive to the nutritional needs of the colony and will adjust their foraging to satisfy any deficiencies.  They are also efficient at exploiting microhabitats within the home.

Colonies are known to establish in folded towels, that sock that fell behind the dryer, unused hollow children’s toys, curtain rods, hollow doors, an expired box of crackers at the back of a pantry, or small cracks or voids in furniture. They are attracted to moisture and will seek out leaks, condensation and moist foodstuffs.

Odorous House Ants, so named because of the musty smell released when crushed, are a common ant, often establishing in wall voids and foraging in the kitchen and pantry. Once many years ago, I came downstairs early one morning to find my three year-old son sitting on the floor of the family room, wearing a football helmet, repeatedly smacking a column of these ants with a hammer as they trailed from the family room slider to the kitchen pantry. We call this “mechanical control.”

Acrobat Ants get their name from the peculiar habit of holding their abdomens over their heads while they run, when disturbed. Small ants, they are easily identified by the shape of their abdomen.  Each black ant is shaped like a tiny “Ace of Spades”. They have a preference for cracks and small voids in furniture and wood construction features.  Though this species have a sting, they rarely use it and are too small to penetrate the skin of most people.

Carpenter Ants are famous throughout the US for invading and damaging homes. In Southern Arizona, they are found in mountainous regions where they establish in any ready void.  If they find rot or damaged wood, they will excavate it to create chambers, to develop into “satellite” interconnected colonies. All of these colonies must be located to effect control of the infestation.  This is especially difficult since the colonies can be more than 100 feet apart and located in trees or structures close to the home.

Ants outside the Home

Ants found in the home can be found outside as well. There are some ants that are only found outdoors.  The most well-known of these is the Harvester Ant. These are the large ants found throughout Arizona that clear away large patches of desert around a large crater like hole.  Kids know these ants as the ones that come with the toy “Ant Farms” and they are aggressive stingers.  They will harvest nearly any organic material and drag it underground.

Often mistaken for the Harvester Ant is the Leaf Cutter Ant. To the untrained eye, they are similar in size and shape, also possessing a formidable sting.  The opening to the nest lacks the cleared away area, and the ants are carrying in a different sort of groceries.  Leaf Cutter Ants will measure and cut circles out of leaves, riding the cut pieces to the ground. These are then carried down in to the colony.  The trail of ants sort of looks like a line of little sailboats, crossing the dessert. Looking closely you will find that many of these little boats have a passenger, a very small ant, riding on the back of the larger ant. The small ant serves as a tail gunner for the larger occupied ant, watching for an aerial attack from a parasitic wasp.  Once the leaves are underground, they serve as a growth medium for a farm of fungus.  It is this fungus that the “Farmer” Leaf Cutter Ants feed on. Ant baits that might work on other ants will hold no attraction to these ants.

Ants are not limited to the home. Sugar loving ant species are commonly found invading bakeries and restaurants.  Pharaoh Ants, so named because they are believed to be one of the original plagues set upon Pharaoh by Moses, are small, light colored ants that can become big problems in hospitals where they get in to IV bottles and contaminate dressed wounds. Difficult to control, treatment programs may take weeks to execute.

Other introduced species may include the Red Imported Fire Ant (RIFA). These ants, once established have been known to kill babies and pets left unattended and can be quite aggressive.  Since Arizona is considered to be free of RIFA, any confirmed sightings immediately trigger aggressive control programs by the Department of Agriculture.  Back in the late 1990’s a sighting of RIFA on a Yuma area High School football field triggered an aggressive program, taking nearly a year to complete with a price tag of over $100,000.

With so many different kinds of ants, each with different behaviors and control programs, early identification and intervention is critical to keep the infestation from spreading. Professional control programs by specially trained service technicians are recommended.

Please contact University Termite & Pest Control Inc. with your thoughts  or questions relating to this article.  We are here to help!