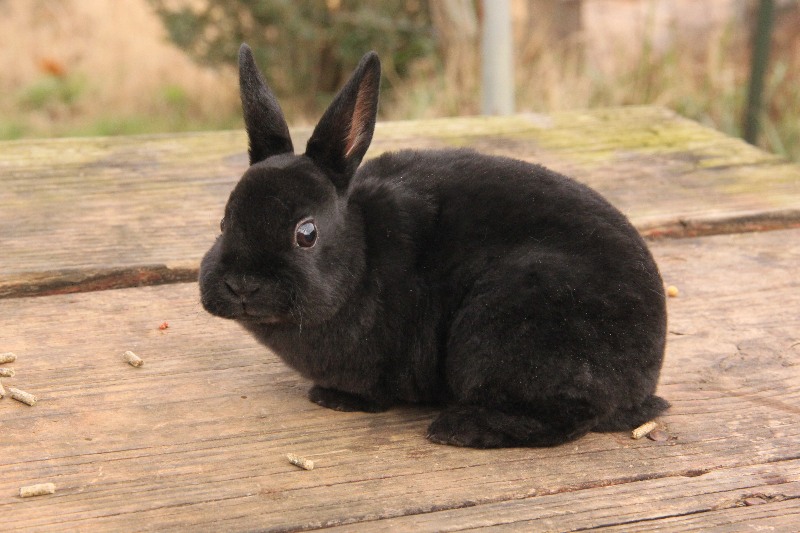 The team at University Termite & Pest Control, Inc. with their sharp eyesight, lightning quick reflexes and incredible ingenuity pulled off a capture and rescue of a dumped pet rabbit.

It was early in the morning and the first people were just arriving at the office. One of the customer services reps. noticed, as she pulled in, that there was something odd and out of place by the fence line. The more she focused on it, the more convinced she was that it was alive. She tried to approach it, but it bolted. She enlisted a couple of the technicians to help her get it corralled. It was touch and go there for a while, with the bunny using its whiles to dash to and fro. But persistence paid off and the rabbit, to be named later, was safely in a box.

The rabbit was quite excited and worked up over the pursuit, but was a beautiful salt and pepper color, with tiny flecks of white on a nearly pure black background. When some of the braver people standing around reached in to pet it, they exclaimed “Wow, it is really soft!”

Shortly after capturing the rabbit, they brought the animal inside the building. They handed it over and said “Ok, we caught the rabbit, what now?” It seems that during the chase, both of the technicians noticed that the rabbit moved oddly, with one leg extended out, as if it were broken. Nobody here at the office is a Veterinarian, much less an expert on rabbits. After a bit of calling around and looking into the issue, we settled on Valley Animal Hospital to check the poor little thing out.

After a short discussion, the manager pulled the short straw and he took the rabbit over to Valley Animal Hospital for an evaluation. They asked him for a name, while he was registering…he immediately replied, “Bugs”, what else would you name a rabbit caught by a couple of pest control guys? The rabbit , a female Rex rabbit, weighed 6 pounds and looked for all intensive purposes to be in great health, with the exception of the one rear leg. X-rays proved that there was no break, and her “gimp” was due to an old spinal cord injury, which is completely healed now. Dr. C, estimated that she is 3-4 years old, her teeth are in great condition and she has at least 3 more years of life in front of her.

We have renamed “Bugs” to “Bun”, a little more ladylike considering her XX Chromosomes. She is currently residing at the manager’s house, under the watchful eye of his wife Caroline, but this is a temporary situation. They have both dogs and cats, and that is a bad mix for bunny rabbits. Bun is available free to the first responsible person who will claim her. Just respond to this post on Facebook, and indicate your interest. We will respond and select someone who will take really good care of Bun, and give her a happy ending, like all good bunnies deserve.