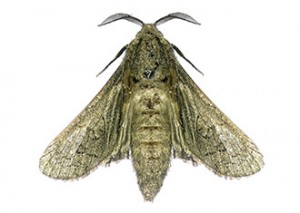 The Pest Management Professionals at University Termite & Pest Control are highly trained in today’s most up-to-date treatment methods. We pride ourselves on our family-friendly moth control. We attack pests, not pets or children. If you have any concerns about allergies or chemical sensitivities, please speak with our representative when you make your appointment. He or she will answer all your questions about our insect exterminating process.

We invite you to call us today for more information or to make an appointment. If you are ready to banish your moths for good, call University Termite & Pest Control:

Over 11,000 species of moths are currently found in the United States, with size, appearance and habit varying greatly! The caterpillar stage is the most destructive: the caterpillar of some moth species are pests of fabric, while others attack dry food products. When fully grown, this insect typically has feather-like antennae and a thick, hairy body. This significant amount of hair is a great vehicle for picking up pollen from any flower a moth lands on, making this insect an important pollinator. Moths can be great mimics, and are known for their ability to impersonate other animals to avoid being eaten by natural predators. As far as their own feeding habits go, some moths suck nectar, but others have no mouths and cannot feed at all. These moths rely solely on energy stores amassed as a caterpillar and usually die within one week.

There are two important fabric-destroying moths in the US–the casemaking clothes moth and the webbing clothes moth. Both are small, with a wingspans less than 1/2 inch. They are rarely seen flying at night, but rather prefer dark, small spaces, such as closets.

The casemaking clothes moth is the least-seen pest of the two, and has less significance economically. It gets its name from the case spun by the larvae, a case which it carries around as it feeds. Larvae favor feathers, wools, and tobacco, as well as other animal and plant based materials. As an adult, it is more brown in color than the webbing clothes moth and is characterized by three dark spots on the wings. Adult casemaking clothes moths do not feed.

If you believe you have a problem with moths around your home, call University Termite & Pest Control and have one of their professionals come over and take a look.  They have the skill and knowledge to identify them and make a correct diagnosis the first time, every time.