Crickets are typically black, gray or brownish tan in color, growing to ½ to ¾ inch in length.  Males and females appear virtually identical to one another, but if you look a little closer, you will see the female has extra appendages protruding from the rear of her abdomen.  These additional body parts, or cerci, are about ½ inch long and their sole purpose is to facilitate the laying of eggs. Both males and females have two pairs of wings, but it is their powerful back legs that allow them to jump long distances, lending to the illusion of flight. With over 900 species of crickets worldwide, only about 120 of these live here in the United States.  Often mistaken for grasshoppers, all true crickets have six legs, flattened bodies and antennae that are as long as, or even longer, than their own bodies.

Field crickets are a common pest and found in all of the lower 48 States. Dark brown to black in color, this cricket is quite a bit larger than the house cricket. Preferring moist, protective environments, such as valve boxes or leaf litter, field crickets rarely wander indoors. There are circumstances which may drive them indoors, but in doing so they radically reduce their life expectancy. An adult field cricket has about two weeks to live if it is trapped inside.  They simply do not thrive in the dry atmosphere of indoors.

Being both nocturnal and incredibly energetic, field crickets spend their nights searching for food and singing their peaceful cricket chirps. These crickets are omnivorous, consuming virtually any available food source. From crops and plants to other insects, even the glue binding books together, these culinary bandits take a meal where ever they can find it.   This makes them a genuine pest problem, for just about anything and everything, indoors and out, is a soluble food source to sustain their population. 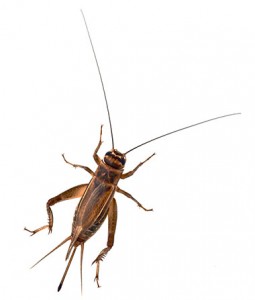 The house cricket, much like the field cricket, prefers to live outdoors. Just shift some rocks, bricks or potted plants in your backyard and almost unfailingly you will send field crickets scattering. They reproduce so rapidly it is not uncommon to find these crickets in groups ranging in size from full grown adults, all the way down to crickets just a few millimeters long. Unlike the field cricket, the house cricket can adapt and thrive in any environment. If you are unfortunate enough to be supporting a population in your home, be aware this type of cricket can survive virtually indefinitely! That is why this insect is so prevalent in residential homes. Two become two hundred in a matter of days.

Hearty and adaptable, the field cricket is particularly adept at gaining entrance to residences. One such avenue is the tiny cracks or gaps between a perimeter wall and the concrete foundation.  Once inside, they, like their field cricket cousins, devour anything and everything in their path.  Damage to silk, woolen and paper products is a common sign of an infestation. If you have crickets living in your walls, small deposits of fecal matter often accumulate in the corners of your home. House crickets are most active at night, and the sound of just one of these pests chirping can be loud enough to shatter the peaceful still and quiet of night. Many an exhausted person or two has done the dance of the cricket, stumbling around in the middle of the night, searching for the source of that interminable noise reverberating through the entire house. Contrary to popular belief, a cricket produces chirps by rubbing its two wings together, not their legs as they are most often portrayed. No matter what the reason for this song, a mating call or just a common cricket serenade, this everyday pest will live a much longer, happier life when he is singing that song outdoors.

Do you have a problem controlling crickets around your home or business? Call University Termite & Pest Control and have one of their professionals come over and take a look.  They have the skill and knowledge to identify them and make a correct diagnosis the first time, every time.

CALL TODAY FOR A FREE Evaluation