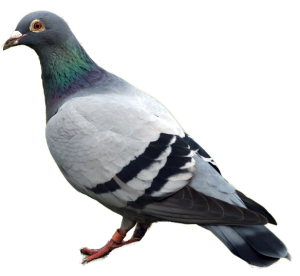 The Good Birds and the Bad

We love birds.  From the majestic bald eagle to the tiniest of hummingbirds, it is wonderful to watch them fly, to hear them sing. There are thousands of different kinds of birds, in every size and imaginable color. From the time the dawn breaks to the quiet stillness of evening, birds and their songs are a part of, and everywhere in everyday life. The vast majority of birds are seen as a positive and welcome addition to any landscape. There are those few, however, that are considered a pest or nuisance.

When a nuisance bird decides to make your home their own, battle lines are often drawn quickly and definitively. Not only are these types of birds responsible for unsightly messes, smells and incessant noise pollution, but the parasites and diseases they can carry can be deadly. Urban nuisance birds are commonly infested with lice, mites, ticks, and batbugs (a close relative of the bedbug).  Their fecal matter becomes a breeding ground for all sorts of germs and disease. The parasites and mites these birds carry thrive in nesting material and all organic matter spread by their hosts. In the course of a nuisance bird taking up residence in, around or near your home, it is only a matter of time before you will be sharing much more than just a living space with such undesirable pests.

When it comes to pest management in the avian world, there are strict and crucial guidelines enforced by each individual state. First and foremost are the federal laws protecting all birds, including those that are an endangered or rare species. All birds are protected by this law, with the exception of the common pigeon, the house sparrow, and the European starling. Elimination techniques a pest professional uses are also closely monitored on both a state and ultimately federal level.  A qualified pest management professional will have thorough knowledge and understanding of state and local laws, their ordinances, and will be able to explain the various tools and procedures used in nuisance bird management. The most effective protocols incorporate an integrated pest management program (IPM) approach. This includes monitoring, restricting access to indoor nesting sites, sanitation and elimination of food and water sources.

Are they a pest or are they a pet? This is a frequently debated topic when it comes to this particular bird.  Everyone can recall the peaceful scenario of folks sitting on park benches, a crowd of pigeons at their feet, every now and then tossing out a bit more food.  Carrier pigeons were used in both World Wars, inconspicuously ferrying messages, codes and secret documents to their intended destinations. One carrier pigeon by the name of Cher Ami saved the lives of over 200 American soldiers.

Although originally brought to the Americas from Europe as a domesticated bird, many quickly managed to escape and, evading their captors, quickly initiating their own feral breeding program. The threshold at which the pigeon crosses over from pet to pest is actually quite definitive. When your home or commercial building becomes their preferred place to live or loaf (this is the tendency to congregate in one area, separate from where they nest), and their habits begin to smell foul, cause structural damage and even introduces diseases to their surroundings, the inclination to care for quickly turns to take care of.

80 adult pigeons produce a ton of feces in just one year.  That is 2,000 pounds of fecal matter accumulating where they nest and dwell. Pigeon fecal matter is extremely acidic, capable of breaking down and eating through all kinds of materials. Even steel and concrete are at risk, with the feces beginning to etch and erode their surfaces within just a few short months of exposure.

An example of how destructive pigeon fecal matter can be took place in Yuma, AZ, just a few years ago. During a wind storm, a local gas station had its shade canopy collapse, large pieces of twisted metal raining down on the cars and gas pumps below. An inspection revealed that hundreds of pigeons had been living unnoticed on top of that canopy. Between the corrosive power of the fecal matter, copious amounts of nesting material and the birds themselves, the combined weight and weakened steel was enough to send the canopy crashing down.

To an average residence and resident, 80 birds may not sound like a lot. However, when you see and hear 80 birds nesting, cooing and squabbling over space, that 80 quickly becomes overwhelming. At University Termite and Pest Control, we know just how quickly two pigeons can multiply into 80, and our pest professionals are here to ensure your house and properties are subtracted from that equation. 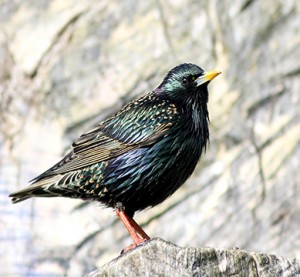 European starlings were first brought to New York during the 19th century by enthusiasts who wanted America to meet and know all of the birds named in Shakespeare’s works.  Like the pigeon, they soon escaped captivity and are now found throughout the entire U.S., in both rural and urban settings.

They are a highly competitive species, and will oust bluebirds and woodpeckers to gain their nesting cavities. Lacking an abundance of previously built cavities, starlings will build their own out of feces and mud. Again, similar to the pigeon, starling excrement is incredibly corrosive, and the feces-tainted soil used to build these nests can contain and transmit serious diseases such as histoplasmosis.

Starlings build their fortified dwellings along rooflines, just under the eaves. These dried and hardened nests are formidable fortresses, requiring intensive effort to remove. Urban areas provide the starling with few naturally occurring cavities, so they will take up residence in a variety of structures to roost and nest. Buildings, parks, trees and houses are all likely candidates when the starling starts searching for a nesting place. 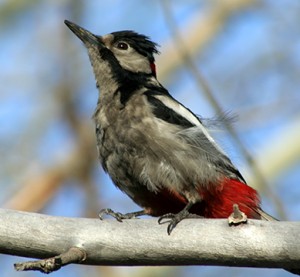 Have you ever woken to the sound of someone pounding incessantly on the metal surfaces atop your roof? Have you ever wondered what that staccato-like hammering and piercing squawking is all about? It may come as a surprise, but all that racket is caused by a single bird. Even the carefree Woody Woodpecker would not be a fan of his real life namesake.  Woodpeckers, although protected by federal law, are often considered a nuisance because of their routines, habits and vocal outbursts. Woodpeckers rarely stay still. They constantly hammer and peck everything around them. From trees to air conditioner units, cactus to telephone poles, this sprightly bird is not bashful about letting the entire neighborhood knowing he is here! There are several reasons a woodpecker performs these rhythmic concertos. Not only are they establishing a territory, they also signal to attract a mate, hunt and search for insects and excavate a future nest site. These undertakings require immense energy and effort, both of which the woodpecker specializes in.

Aside from the incredible amount of noise they create, woodpeckers can inadvertently cause damage to homes, decks, power poles and more. They do not distinguish between what is necessary to them and destructive to us. Woodpeckers are not subject to any lethal means of control due to their protective status. This, however, has never stopped a knowledgeable and professional pest control company, such as University Termite and Pest Control, from implementing alternative methods of reduction and control. Blocking access to wooden and stucco structures has proven to be an effective control methodology. When it comes to woodpeckers, you can also fight fire with fire. Creating and sustaining noise in and around their nesting and hunting areas is a highly effective, non-lethal technique to tell that woodpecker it is time to move on to a more peaceful neighborhood.

The house sparrow is not a true sparrow. They are actually part of the finch family hailing from North Africa. Introduced into America in the 1850’s, the house sparrow is now one of the most prolific nuisance birds found all over the United States. Large populations pose a threat to agricultural areas, where they can consume large amounts of feed. In cities and urban areas, they can live almost anywhere. These adaptable birds reside in parks, recreational areas, in and around all types of buildings, both commercial and residential. The house sparrow is an exceptionally hearty bird with an exceptional reproductive capacity. They need to be, as their numbers can attest. It is not uncommon for this little bird with a giant family to displace native birds for nesting sites.

Nuisance bird management requires thorough understanding of state and local laws. Any professional should be knowledgeable in the most advanced and humane control techniques. If you have a problem with nuisance birds around your home or business, call University Termite & Pest Control. A trained and experienced professional will inspect the conditions and areas sustaining your nuisance birds. Together you can devise the most effective strategy for your needs, your budget and your peace of mind.