There are over 300,000 different species of beetles!  This makes them the largest, most diverse insect family on the planet. Found in almost every type of environment imaginable, many having fantastic designs (i.e. the Hercules Beetle) and seemingly endless varieties of colors and sizes, it is no wonder they can be the most prolific pest with which you have to contend with around your home.

Most beetles can be identified by their distinct, hard, shell-like bodies and wings. These serve as armor to protect their vulnerable and often soft undersides. All beetles go through several distinct stages in their lifetime, with each phase of life posing a unique control challenge.

Typically, an adult female will lay dozens to hundreds of eggs (depending on the species) that hatch into wingless larvae. The larval stage tends to be the time when most of the damage that this pest is going to inflict occurs.  They feed constantly and soon grow into a pupal stage. Like a butterfly’s pupae, this period tends to be motionless, similar to hibernation, when the beetle can cause no harm. The final phase of life is the fully grown and formed beetle, where, once again, it may resume its nuisance activity.

The beetle’s food sources are as vast and as varied as the beetles appearance and proliferation. Certain subsets of beetles feed on wheat, grains and similar foodstuff.  Other species prefer to dine upon fibers, cloth and hair, putting your wardrobe or any and all natural fibers around your home at risk. Another group of beetles specialize in attacking and destroying wood, while others create problems because of their being where they just don’t belong.

WOOD DESTROYING BEETLES IN THE SOUTHWEST

Longhorned beetle is a general term that groups together a family of about 1200 species of borers. That is, they bore into, use as a food source and live in wood. They are typically characterized by extremely long antennae, some of which are longer than their bodies! As larvae, they feed on trees, both alive and dead, logs, and all forms of lumber. As grown adults, these types of beetles typically will not re-infest their food source of wood once they emerge from it. An exception is the old house borer, the only pest in this family common to homes and other man-made wooden structures. 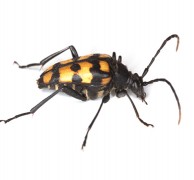 Mesquite Borers are a group of boring beetles known to infest Mesquite tree wood.  They are most easily identified by their extremely long antennae, almost twice the length of their body.  Immature beetles, or the larvae of this species, cause the most damage to the mesquite tree. Eggs are deposited into the wood by an adult female beetle shortly after mating.  The larvae then hatch and develop inside the wood, protected from predators and the elements. Boring tunnels as they constantly feed, the larvae transform their sturdy habitat to a rough powdery dust. Similar to a Powder Post Beetle, the adult mesquite borer will emerge, leaving the confines of the wood with a singular purpose.  Seeking a mate, this beetle will spend the rest of it’s’ life searching, mating, re-depositing eggs and repeating the life cycle.

Most encounters with the mesquite borer beetle are witnessed during this adult phase. It is not uncommon to find these beetles in window sills, wood piles or around fireplaces. Those stylish, decorative mesquite logs you left out over the summer may hold a living surprise for you this fall.

The most misunderstood beetle in the borer family is the unforgettable Palo Verde Beetle. This gentle giant makes its appearance in the summer, most often during the Monsoon season. At least 4 inches in length, and in spite of being armed with large serrated pinchers, the most ferocious aspect of this enormous beetle is its’ appearance. Basically harmless, the Palo Verde beetle has a tendency to inspire needless panic in almost everyone that encounters one.

Powder post beetles are a type of small wood boring beetles. They include the Death Watch Beetle and the Common Furniture Beetle, among many others. They are considered pests due to the fact that over time and left unchecked, they reduce wood to a powdery dust. These beetles are found worldwide, and are second only to the termite in terms of the damage and destruction. Each year, their preference of wood and wood-like products causes millions of dollars of damage and losses in the United States alone. They are indiscriminant feeders, attacking both the hard and the soft sections of wood they infest. Structural infestation in the Southwest is often caused by the use of untreated and infested lumber imported into the United States. These pests are also introduced into homes here in Arizona when furniture or other wooden items are brought up from Mexico, where treatment of wood is not a standard practice.

Bark beetles get their moniker from the damage they inflict to the surface of wood that lies just beneath the bark on a tree.   All trees, whether indoor or out, that do not have bark are of no interest to this particular beetle.  They are not a threat to any wood used in the construction of your home, unless that wood happens to have bark. Bark beetles pose much more of a threat to the trees outside or around the perimeter of your house. In northern Arizona, these pests are an ongoing threat to ponderosa pine trees.  If you happen to find a bark beetle indoors, it is almost certain that small, unwanted visitor caught a ride in with firewood or the like.  Since they spend their entire life burrowed beneath the bark of trees, finding one that has emerged only means it will quickly die and is no cause for concern.

Carpet beetles are found in warehouses, homes, museums, storage facilities and other locations where a suitable food source exists. Adult carpet beetles feed exclusively on flower pollen, but larvae feed on a variety of materials. This includes hair, carcasses, other dead insects and any stored food it can gain access to.  Like other beetles, the larval phase of this beetle is the stage that causes damage to fabrics, clothing, carpets and more. There are visible signs of an infestation of carpet beetles, including shed skins and and little furry larvae that appear to be small caterpillars moving across surfaces.

Dermestids are also known as hide beetles because they feed off of dry animal material such as skin. In homes, hide beetles can do substantial damage to leather furniture and clothing. They will also attack saddles, bridles, and other leather tack stored in your barn or garage. This beetle is important to forensic entomology and has helped with criminal investigations through their association with decomposing bodies. They are also used by museums to prepare bones for display!

BEETLES IN OUR FOOD

These two flour beetles are a common beetle that attack stored foods in the pantry and even on your pet’s dry food. It is common throughout the United States, as it is easily transported from cooler climates where it thrives, to grocery stores everywhere in America.

Flat, shiny, and reddish brown, these two are often confused for each other. Neither species is able to feed on whole kernels, but thrive on flour and grain. They are most commonly associated with food production and storage facilities, but can be particularly destructive for food products stored in your pantry. Cereals, cookies, and crackers are among their favorite treats!

Don’t forget about Fido…these two pests readily get into dry dog and cat food.  The will infest dog biscuits, treats, or anything else with a processed or partially processed grain ingredient list.

The sawtoothed grain beetle is a very distinctive member of the stored food product pests. It’s named for the six tiny saw-like teeth it has on each side, located just below the head.  It can be found in cereals, bread, flour, chocolate and other foods of a similar nature. It is small enough to penetrate very small cracks and can easily infest stored foodstuffs. Sawtoothed grain beetles contaminate more food than they consume, and if left undisturbed, populations can explode overnight. They are most often discovered when the adult beetles leave the food source and are observed crawling about a pantry or nearby location.

This invasive and seemingly ever-present pest commonly causes a variety of damage to many different types of plants and all types of improperly stored food products. Common Weevils are the Rice Weevil, the Cowpea Weevil and the Granary Weevil

All of the stored food/pantry pests can be thwarted by removing the target foods from the boxes and bags they are in when purchased and transferred to sealed, air-tight containers.

There are also an endless variety of nuisance beetles common to Arizona and your backyard.

Ground beetles are the single largest family of  beetles.  They are often a plain brown or black to grey in color with a common feature of  lines running the length of their wing covers.  They can emerge in huge numbers when environmental conditions are just right and can seemingly overwhelm a property on occasion.  They cause no real damage, and control measures are not very effective against the Ground Beetle – plain name, lots of them around.  Similar yet varied in appearance.

These metallic beetles (not really bugs at all) are a seasonal issue and also cause no real damage, other than making a big show when they fly around.

These are all grouped together as most people confuse them for each other.  They are black, relatively large beetles, often found around decomposing cacti, under wood piles or leaf litter.  They are not a threat, other than the unpleasant odor, taste that is experienced if a dog attempts to eat one.

For University Termite and Pest Control, we believe pest control success is achieved in adherence to and implementation of our professional treatment guidelines, down to the last finite detail.   We take pride in being there when we promise to be, equipped and prepared to take care of each pest issue, from the identified all the way to spontaneous or unforeseen challenges.  Quite simply, we provide the entire solution, beginning to end. Advising, educating, initiating and encompassing every aspect of pest control, your University professional will work with you to ensure success. When it comes time to make the choice for pest control for your property or home, there is only one intelligent choice…

I am ready to talk to a University Specialist about my beetle issues.