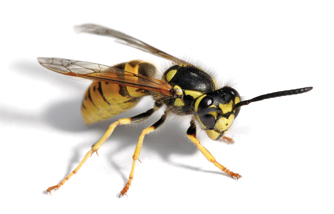 Related to bees and ants, there are many kinds of wasps. They may be solitary, communal, living in groups or social structures. The nests are made of mud or paper. Wasp stings account for more deaths in the US than snake bites!

Found throughout the United States, bald-faced hornets are large, black-colored wasps with pale white or yellow markings on the head and abdomen. They build their nests above ground out of paper-like material called carton. The nests are brownish-grey and will often grow as large as soccer balls! While these insects and their nests are large and intimidating, the is very little risk when it comes to getting stung. The bald-faced hornet almost exclusively feeds on other insects (including yellow jackets), and are considered to be beneficial.  Should you meet a nest that is close enough to people to warrant control, please seek the help of a professional! 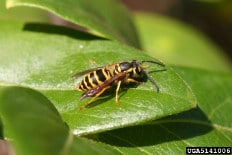 There are several species of yellowjackets. These flying insects typically have a yellow and black head/face and patterned abdomen.Yellowjackets are social insects that live in nests or colonies with up to 4,000 workers. They are most active in the late summer and early autumn when a colony is at its peak. Yellowjackets feed on sweets and proteins, and therefore commonly invade outdoor events. 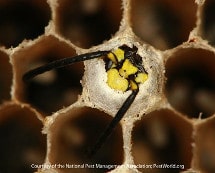 These pesky critters can be found anywhere humans are found. They build paper carton nests out of chewed up cellulose, which are usually found in the ground or in cavernous areas such as eaves and attics.

Yellow Jackets stings pose significant health threats to humans, as they are territorial and will sting if threatened. They are known to sting repeatedly and can cause allergic reactions. Yellowjackets and other stinging insects send over 500,000 people to the emergency room each year

If you believe you have a problem with rodents around your home, call University Termite & Pest Control and have one of their professionals come over and take a look.  They have the skill and knowledge to identify them and make a correct diagnosis the first time, every time.